Home > Illusions of democracy and the media

Illusions of democracy and the media:

While it may still be claimed that democracy is the best political system yet devised, its contradictions and crises are all too apparent. This ‘school for all seasons’ – jointly organized by the University of Padova, SOAS and Goldsmith University – aims to interrogate some of the illusions of democracy with the participation of an international set of scholars and PhD students. The activities of the school will explore, through lectures and interactive sessions, a set of interlinked concerns: 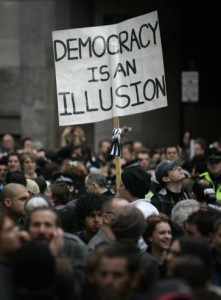 DEMOCRACY (EUROPE) AND ITS CRISES:

Capitalist democracy as it functions in the West has produced unprecedented levels of inequality, profound issues around identity-formation and growing popular indifference to the formal political system. Cynicism and alienation are high, especially among minorities and youth. However,  new forms of participation are being explored, from the local to the transnational level. How/can democratic politics as a collective activity reinvent itself? Where are the shoots of alternative practices?

DEMOCRACY BEYOND THE WEST:

POLITICAL CHANGE IN THE MIDDLE EAST

The world watched amazed at the rapidity of the Arab Spring transformations in the Middle East and their discourses of rights, participation and gender equality. Yet those political achievements have been rolled back with the return of authoritarian systems and leaders. Is democracy a chimera in the region? What are the obstacles to sustained political change?

A free media system and open internet are key to a democratic polity, yet Wikileaks and the Snowden affair revealed the level of surveillance and control across Western democracies. Reality television elections and social media polling give the appearance of participation yet change nothing. What is public perception of digital control? And what are the implications of surveillance for citizens, journalists and activists? How can public discussion be reignited, given the overabundance of pundits and gurus? Who speaks and which voices are heard? How should modern democracies limit corporate media and internet power?

The rethinking of ‘liberal education’ requires a critical analysis of the current theories of knowledge and human growth embedded in the institutions of public education in Western countries. How is knowledge produced, governed and transmitted in schools and universities, and by whom? The ‘new Public Management’ rhetoric has become an authoritative discourse that grounds educational processes without any public scrutiny or debate concerning its presuppositions about human development and well-being.  Increasingly, ‘liberal education’ seems to be the soft instrument of a new authoritarian way of creating a ‘post-democratic’ individual compatible with and synchronized to the globalized market.  What is silenced and who can speak in this new regime of educational process and how can critical spaces of open debate be maintained?

DEMOCRACY, POLITICS AND THE GLOBAL

The rapid growth of ISIS and the Charlie Hebdo attacks are but two instances of the way in which political events transcend national borders, and can have profound and unanticipated consequences in many places. Moves toward increased securitization and limits to free speech and movement in Western democracies is one ironic outcome of those two events. How do we reimagine a cosmopolitan politics beyond the nation-state? How do multi-level networks of governance and activism respond to the wager of democracy? What kind of powers are structuring the global? And what kinds of social movements might prefigure new democracies, beyond illusions? Under what conditions can communication, including digital media and their governance, support democratic politics in the global context?

Six grants (500 euro each) are available for students (master courses and PhD level) from the University of Padova. Interested students may contact: Prof. Claudia Padovani (claudia.padovani@unipd.it) and Prof. Francesca Helm (francesca.helm@unipd.it) before March 15. Documents to be sent: an short updated CV, a short note (max 500 words) concerning current research activities and a letter from your supervisor if working on a master or PhD thesis. Final selection will be made by March 30.